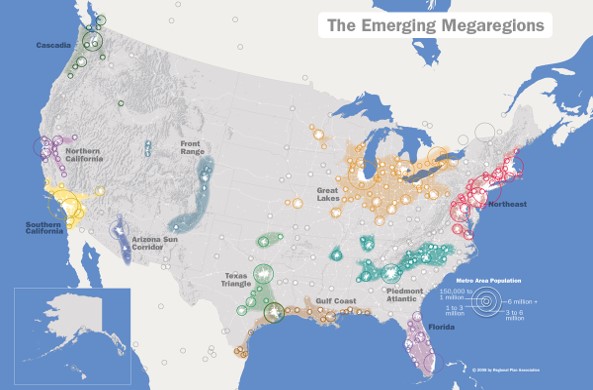 A major focus for Global in 2020 and beyond is the emergence of megaregions, which are large networks of metropolitan areas, where most of the population growth in the United States by mid-century will take place. America 2050 (www.america2050.org) is based on the megaregions concept and was developed by the Regional Plan Association as a national infrastructure planning and policy program. The Regional Plan Association provides leadership on a broad range of transportation, sustainability and economic-development issues impacting America’s growth in the 21st century.

Examples of megaregions are the Northeast Megaregion, from Boston to Washington, or Southern California, from Los Angeles to Tijuana, Mexico. Megaregions can span across state boundaries and comprise of multiple, adjacent metropolitan areas connected by overlapping commuting patterns, business travel, environmental landscapes and watersheds, linked economies and social networks.

Starting in 2009, America 2050 has helped to shape the national debate on high-speed rail and developed recommendations on how national investments should be focused, with the greatest demand for ridership. For example, the Trans-American Network is an ~$8 billion investment, which includes high-speed rail, an improved freight network as well as improved highways. America 2050 continues to focus on accelerating investments restoring the nation’s infrastructure, including the expedition of environmental review processes on major job generating infrastructure projects, energy planning and water integration.

Global plans to use the resources and information provided by America 2050 to help guide our investment making decisions. We believe this strategy will be critical as we grow in our ability to source opportunities and execute on the business plans for the projects we undertake. This thoughtful approach to investing should provide market advantages and support our primary goals of maximizing returns and mitigating risks.